In this post, you’ll discover how God’s grace and mercy are separate characteristics. Then, you’ll learn how they go hand in hand, one with the other. Ultimately, you’ll see how God has richly blessed you through his grace and mercy. 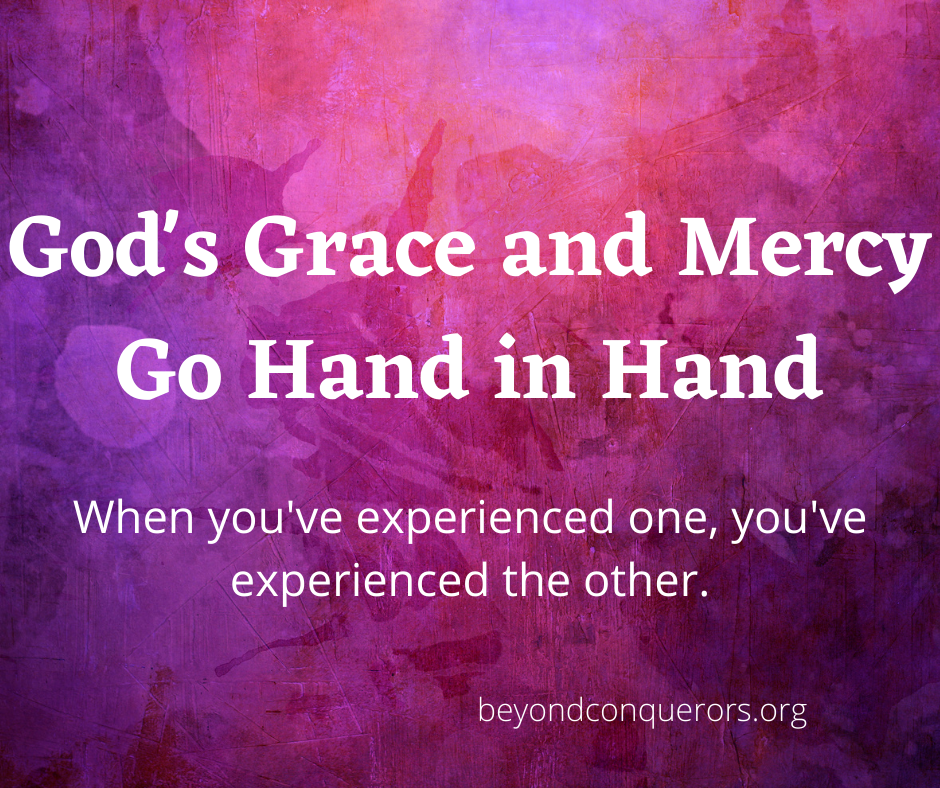 Let’s begin by looking at the meaning of the word grace in the Bible. To start off, God’s grace has been around forever because God is gracious. Before God created the world, His grace was already at work.

2 Timothy 1:9 says, “This grace was given us in Christ Jesus before the beginning of time”.

Think about that for a moment. Before you were even born, God extended His grace to you.

It’s a part of who He is. God will always act favorably towards you because of His grace.

Psalm 103:8 says, “The Lord is compassionate and gracious,

slow to anger, abounding in love.”

Because of His grace:

Romans 6:14- ”For sin shall no longer be your master, because you are not under the law, but under grace.”

Romans 3:24- “and all are justified freely by his grace through the redemption that came by Christ Jesus”

1 Peter 4:10- “Each of you should use whatever gift you have received to serve others, as faithful stewards of God’s grace in its various forms.”

Basically, God wants to give you so much out of His grace. 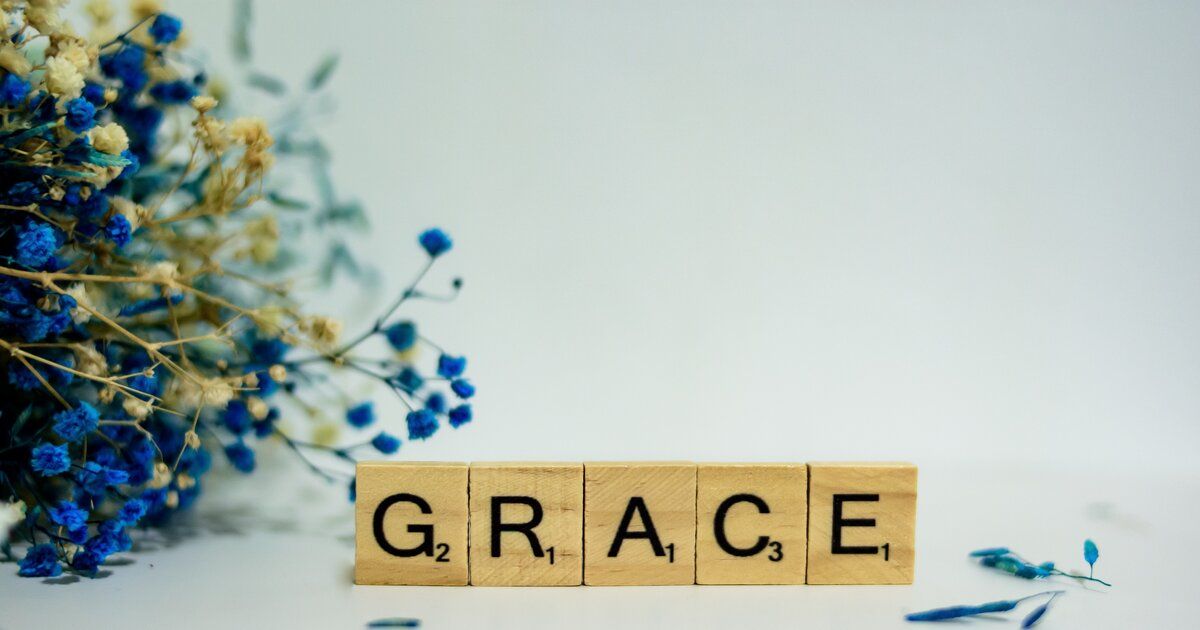 God's Grace to You

Are you in need to be forgiven for your sins? Do you need to be set free from addiction? Maybe you need a miracle in your health. Or, maybe you want to discover the place God has for you to serve in the church.

Whatever your current need, God wants to meet it according to His grace. God wants the best life for you in Him. All you have to do is ask Him in prayer.

Because of His grace, He will answer your prayers if you believe and follow His ways. After all, “He said to me, ‘My grace is sufficient, my power is made perfect in weakness” (2 Corinthians 12:9).

Therefore, God gives to His children because of His grace. You can’t earn it, nor can you buy it. It’s unmerited.

Basically, grace means getting what you don’t deserve.

On the other hand, mercy means not getting what you do deserve. God’s mercy means He is patient and holds back his hand of justice.

God is just. He punishes those that sin. According to Romans 3:23- “All have sinned and fallen short of the glory of God.”

You, me, and the rest of the world were born separated from God because of sin. Furthermore, sin can be defined as rebellion against God. And, we were born into sin.

Eventually, everyone that stays separated from God by sin will receive punishment for that sin.

However, God doesn’t want that for anyone. Instead, He patiently gives everyone a chance to repent and enter into a relationship with Him.

2 Peter 2:9 says, “The Lord is not slow in keeping his promise, as some understand slowness. Instead, he is patient with you, not wanting anyone to perish, but everyone to come to repentance.”

As you can see, mercy equates to God’s compassion. God sees you in your current state, and it touches His heart. Then, out of compassion, He holds back any punishments. 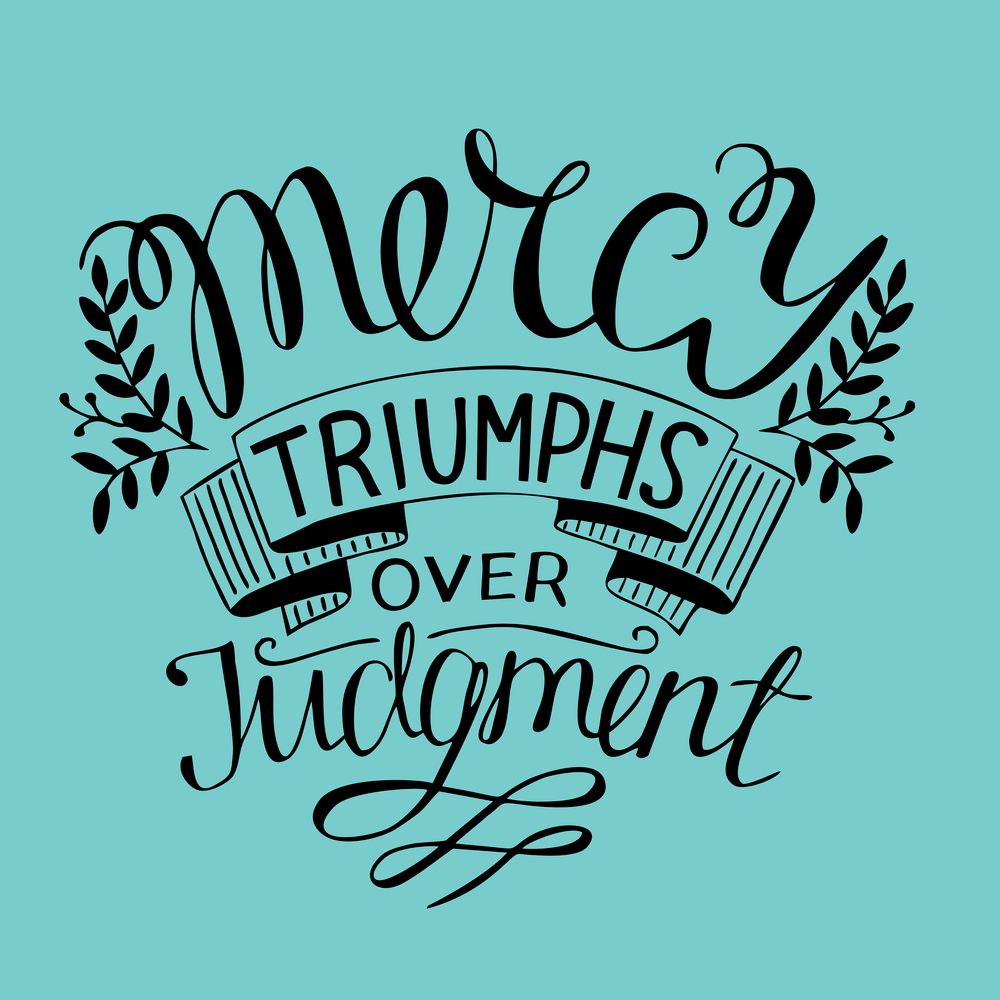 “But I don't ask for justice," the mother explained. "I plead for mercy."

"But your son does not deserve mercy," Napoleon replied.

"Sir," the woman cried, "it would not be mercy if he deserved it, and mercy is all I ask for."

"Well, then," the emperor said, "I will have mercy." And he spared the woman's son.

God's Mercy Waits for You

That’s what God’s mercy does. Even though our sin is worthy of death, God has compassion and waits for us to repent.

In His mercy, God wants to offer us forgiveness. Also, His mercy takes pity on our situation and gives us a way out. Finally, because He is merciful, He is always ready and willing to come to our aid.

God's Grace and Mercy Work Together

As you can see, while God’s grace and mercy are two different aspects of His nature, they work together for your good.

You can’t have one without the other. God’s mercy keeps Him from punishing us for our sins while His grace provides the forgiveness of sins through Jesus.

Think of it this way- God sees you where you are at, God has mercy on you and withholds judgment, and His grace sent Jesus to the cross to pay the price for your sins.

Whatever your need is, God’s grace and mercy cause Him to act on your behalf.

He is just waiting for you to ask.

If you need someone to pray with you, please let us know by submitting your prayer request. As Hebrews 4:16 says, “Therefore let us draw near with confidence to the throne of grace, so that we may receive mercy and find grace to help in time of need.”

If you are looking for more spiritual encouragement, read our post- Putting Him First and Seeing Everything Fall into Place!